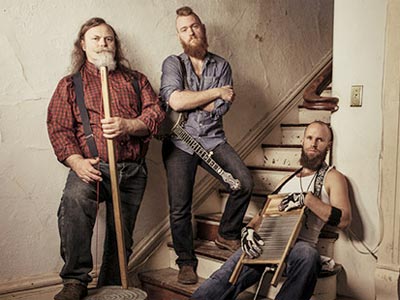 The Ben Miller Band plays a gritty, modern mixture of various types of old American heritage music, including blues, bluegrass, folk, and country. Originally, the bandmembers called their sound “Ozark Stomp” as a tribute to the influences from their geographical region, but now refer to it as “Mudstomp” in reference to their label, which focuses on similar music, but in a wider regional area.

Ben Miller, who grew up in rural Washington state before attending art school in Philadelphia, had been working as an open-mike night host in his adopted home of Joplin, Missouri when he met and began playing music with Doug Dicharry and Scott Leeper.

Miller fronts the band on guitar (styles include both slide and fingerpicking), banjo, harmonica, and lead vocals. He’s also proven to be an accomplished songwriter. Dicharry is primarily a percussionist, though he also plays trombone and mandolin. Percussion-wise he handles drums, washboard, and electric spoons. Leeper gives the band its backbone, keeping rhythm on his homemade one-string washtub bass. The bass is constructed from a weed-eater string that runs from the end of a stick that sits upon an inverted washtub, to the washtub itself, which presumably houses an elaborate pickup system that gives the instrument’s deep resonant sound a lot more volume than you’d expect. Occasionally, Leeper also keeps rhythm on the side of an old-school fire bell that he’s transformed into an interesting-sounding drum. Dicharry and Leeper both add backing vocals as well.