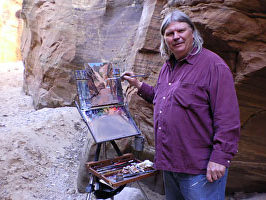 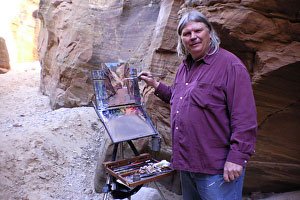 J. Brad Holt grew up in Cedar City, Utah. He is a graduate of Cedar City High School and Southern Utah Universtiy. He spent childhood summers working on his grandfather’s ranch in Orderville, Utah, hauling hay and punching cows. At age seventeen he joined the Utah Army National Guard where he served for the next twenty years as a member of HHB 2/222 FABN. Brad is a musician specializing in Early Woodwinds. He spent several seasons as a musician/performer with the Utah Shakespearean Festival in Cedar City, Utah.

Brad has taken First Place in the Everett Ruess Plein Air competion in Escalante, Utah in 2006. He twice recieved the Artist’s Choice Award and was Featured Artist in 2012. He has been an artist participant in the Zion Plein Air Invitational: In The Footsteps of Thomas Moran, since its inception. Brad has participated in numerous juried exhibitions and invitational shows including: The Springville Spring Salon, The Southern Utah Invitational, The Sears Dixie Invitational, Art for the Parks, and Land of Contrast: The Dixie National Forest Service Show. He has been published in Poulton and Swanson’s: “Painters of Utah’s Canyons and Deserts, and ” The Gallery: Antiques and Arts Weekly.”