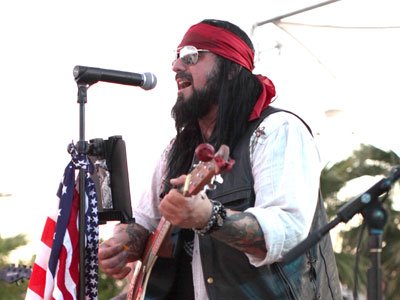 The long hair, the tattoos, the sunglasses, the hat, the no apologies—If You Want A Bad Boy, you found one, but you found one with heart and a passion rarely seen. Raven taps into a rock n’ roll like rebellious spirit, that reminds you of early Lynyard Skynyrd,and Guns N’ Roses in his “Southern Rock” sound.

Raven was a touring musician all through the 90’s, with a song on the hit TV show Malcolm in the Middle. He was signed to Dreamscape Records from New York City in 1996. In early 2001 after years of touring Raven retired from music to focus on his other passion martial arts. He has owned 3 martial arts schools co/created a style called Kajukibo and is currently a 6th degree black belt.

However It was not until he moved from his hometown of Richmond Virginia to Southern Utah did he re-discover his love for writing and preforming music.

Now with his feet firmly on the ground and a loving family to support him, and great friends surrounding him he is back to what he dose best rocking, from burning the barn down in our small town to the big stage in the city!